The Create New Year command prepares a file for the new year based on the accounting file that is being closed. The command does not modify the current file, so it can be executed without any effect.

Logics of the transition to the New Year

With Banana Accounting you have a separate file for each year. When the new year starts, the operational logic is as follows:

Once the New Year's file has been created, those who have subscribed to the Professional Plan of Banana Accounting Plus, will see the message Advanced Plan in demonstration mode. This message will appear in the Info window at the bottom of the screen and it will only disappear when reaching 70 transaction rows in the Transactions table.

Before updating opening balances, to avoid any differences between closing and opening balances for the following year, it is important to ensure that you have performed all checks, verification operations, and all closing accounting entries. Please refer to the page:

The Create new year command performs automatically the following operations, taking into account the parameters set by the user:

The Create New Year dialog allows you to specify the parameters for creating the new year file: 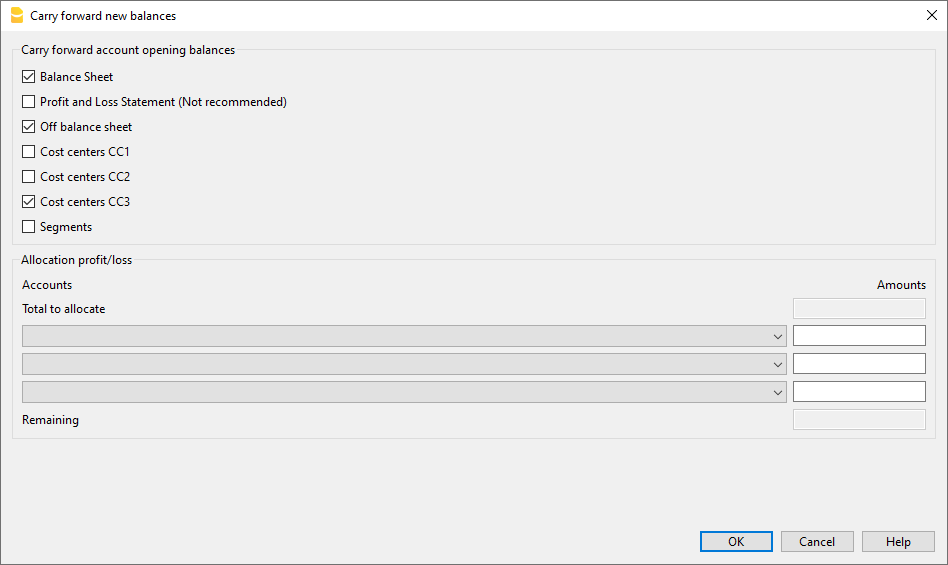 The opening balances of the selected options are carried forward

Balance Sheet
Carries forward the balances of active, passive and equity accounts. This option should generally be activated.

Profit and Loss statement (not recommended)
The balances of the expense and income accounts must NOT be carried forward to the new year.
This option is only used in special situations. Activate this option only if you are sure of what you are doing.

Off balance sheet
Reports accounts with BClass (5 and 6)

Cost centers
They must be activated if the cost centers are used to manage positions that must be continuous over time, such as customers, suppliers and partners.

Cost center CC1
Those starting with a dot ".".

Cost center CC2
Those starting with a comma ",".

The opening balances of the Segments are created with opening transactions in the Transactions table.

Note: settlement operations such as the recognition and closure of transitional accounts, these must be entered manually.

When the opening balances are carried over into the new year, the profit carryover accounts are added to the figures shown.

Total to allocate
The program will automatically indicate the profit/loss amount that needs to be allocated.

Accounts
Select the account or accounts (up to three) into which the operating result is to be divided. If there are several accounts for the allocation of the financial year result, the amount must be entered manually in the appropriate boxes.

If only one account is indicated, the amount will be automatically entered into the account selected from the list. The program automatically updates the opening balances. The total assets corresponds exactly to the total liabilities.

Allocation of the result of the accounting period on more than three accounts.
In this case, allocate the result of the accounting period automatically on the Profit or loss brought forward account as usual, and continue to proceed with the creation of the new year.
In the Transactions table of the new year (new file), perform a multiple posting to attribute the operating result from the Profit and loss account carried forward to the desired accounts.

Postponing the allocation of the profit or loss for the year
If you do not want to allocate the year's profit or loss yet, you can proceed to the creation of the new year anyway, by clicking on the OK button. Afterwards you can proceed to allocate the operating result from the menu Actions → Update opening balances. The program displays the same window that appears with the Create New Year command.

Save the new file

The program creates a new accounting file for the new year,:

If there are differences or other error messages, you may also not save the created file and repeat the new year file creation operation later.

After having entered the last modifications in the previous year, use the Actions → Update Opening balances command, to retrieve the opening balances and attribute the profit of the last year anew.

This operation can be repeated several times and can be carried out safely, as the integrity of the data during the changeover is guaranteed and there is no loss of information.

If you wish to switch to another type of accounting for the new year (with multi-currency or with VAT) proceed with the creation of the new file and then use the command Tools → Convert to new file.

If you want to create a copy of the file, without reporting the balances, use the command Tools → Create file copy.

Once the balances have been carried over into the new year (new file), if there is a need to change the opening balances, they can be changed manually by changing the amounts in the following columns:

If you have made changes in the previous year's file, click on the menu Actions → Update Opening balances, to resume and update the opening balances again.