The multi-currency chart of accounts

In the File → Accounting properties, the basic currency should be defined.

Assets and Liabilities accounts, other than in basic currency (EUR in the example), can also be set in different currencies.

Income and Expense accounts, other than in basic currency (EUR in the example), can also be set in different currencies.

Explanation of the columns of the multi-currency accounting

Currency
Enter the symbol of the account currency. For foreign currency accounts, the symbol must also be present in the exchange rate table.

Opening currency
The initial balance is entered for each account, whether it is a basic or foreign currency account

The opening balance in basic currency

In the chart of accounts, it is necessary to insert the predefined accounts for the exchange gain and loss to be reported in the File menu File properties → Foreign currency. 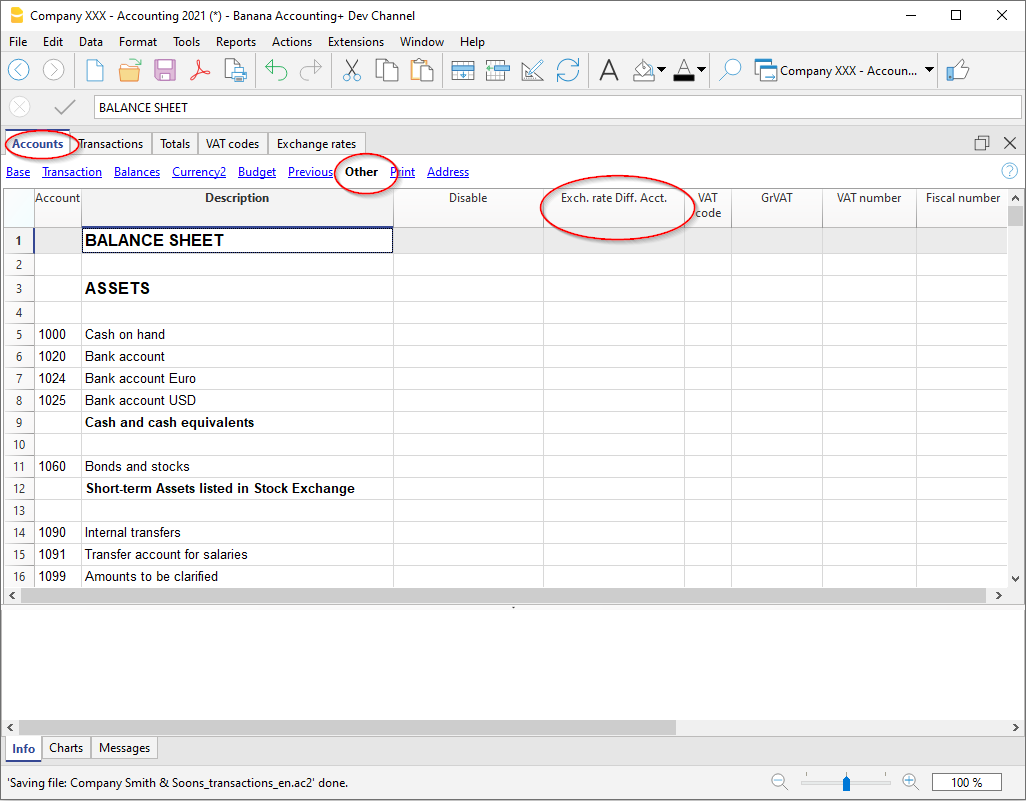 Exchange rates are fluctuating. The actual value of the balance in the account currency varies therefore depending on the foreign exchange fluctuation.

This alignment operation is done at the end of the year, before closing the accounts, or when you want to print a balance sheet with exchange values that correspond to the current reality. See the command Create transaction for exchange rate variation.

There are accounts (related to investments, for example) for which a so-called historic exchange rate is being used. By an historical exchange rate, we mean an exchange rate that doesn't vary over time.

There are two ways to have currencies that do not vary:

Normally, the columns with amounts in foreign currency don't have totals, as it makes little sense to calculate totals for values in a different currency.

If you have a group that includes only accounts in a specific currency, the currency symbol can be indicated at a group level and, in the Accounts table, the program totals these amounts. If there were to be accounts with various currency symbols, there would be no amount indicated (the program would not report an error either).