The grouping and totaling system

The Banana grouping and totaling system is based on the following columns:

With this system, an account can be totaled in a group row, the group in another group and so on... in order to create different totaling levels.
This totaling system is very powerful and flexible, but it takes some "getting used" to it, in order to be able use it well.

Examples of the main groupes in the Double-entry accounting

Every Chart of accounts uses its own totaling system. Hereunder the main groupes of the Double-entry accounting are being explained.

In the Double-entry accounting, the total of the Debit balances (positive) together with the Credit balances (negative) have to result in 0 (zero).

The calculation sequence to arrive at 00 is therefore as follows:

The result of profit & loss statement is added in equity

As you can see in the example, the Group 02 (Profit /Loss from Profit & Loss statement) is totalized in the 297 liabilities group (current year result).
With this group organization, we have several advantages: 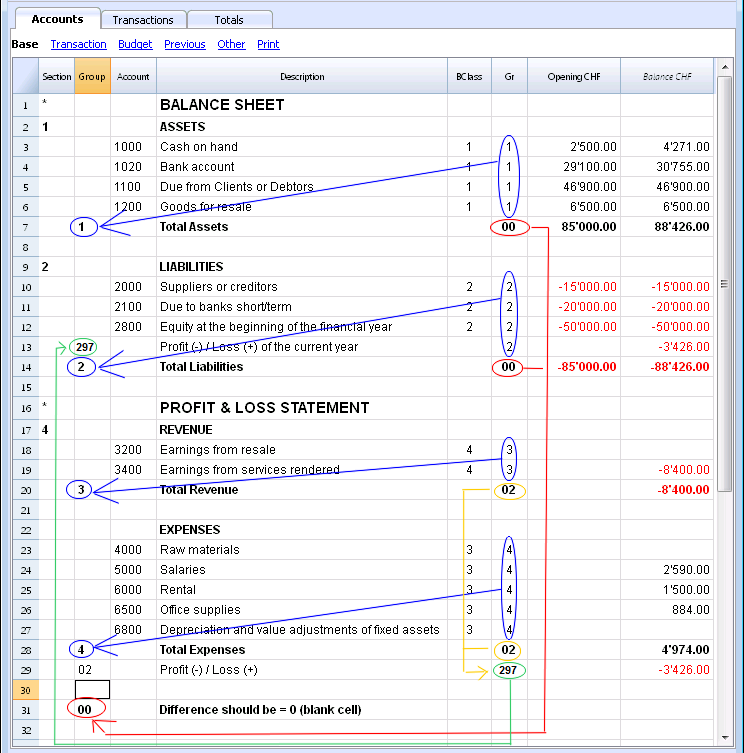 With this system it is easy to add totaling levels.
When we want to create a subgroup for the Cash & Cash equivalents accounts:

In case you want to insert another subgroup, "Current Assets", proceed in the same way.

In case the Chart of accounts shows subgroups that are no longer needed or not wanted, these can be deleted. Just delete the row of the subgroup and modify the Gr of every account that was part of that subgroup.

Checking of the structure

Once the Chart of accounts has been set up, execute the Check accounting command of the Account1 menu. In case there are errors, the program issues a warning.

This warning appears when a Group is being totaled in a Group of a lower level, reason for which an infinite error loop is being created.
There would be an infinite loop when, in the preceding example, the Assets Group (1) would be totaled in Group 10.
The program, after having calculated the Group 1, would total the amount in Group 10, which in turn would total the amount in Group 1, and then again in 10 without ending.

It is also possible to use a Profit & Loss Statement that starts with the total Business result and that subtracts the costs.
Hereunder the example of the Swiss PME Chart of Accounts is shown. 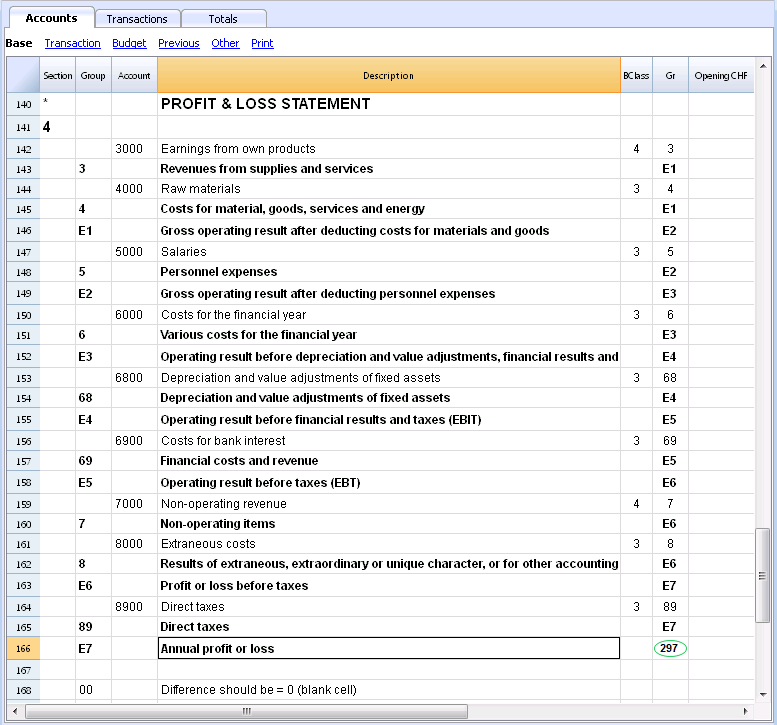 Extended use of the totaling system

The totaling system is very flexible:

Totaling of the Amount columns

The sequence of the calculation

The programme calculates the totals in the following manner:

This documentation is outdated

Search in the latest documentation

The feature you are looking for is missing? Try the new version! Banana Accounting+