Banana 7 is no longer supported and up to date.
See what's new in Banana Accounting Plus, the improved, faster and fully compatible version.

This documentation is outdated

The most complete and up-to-date documentation is the one of Banana Accounting Plus: Try it now

Explanations of the columns

In the Transactions table of the Multi-currency accounting there are the following extra columns: 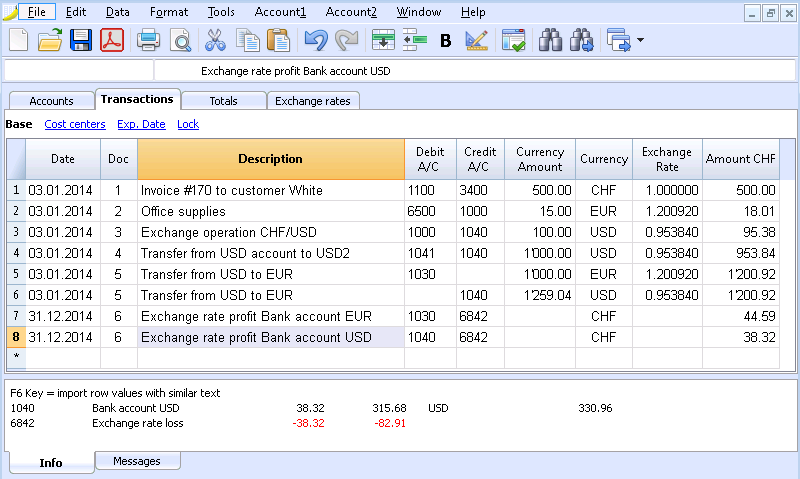 For each transaction, there are two accounts (debit account and credit account). In the program, only one foreign curency per transaction row can be used. So there can be the following direct combinations:

The accountant is the one who decides which exchange rate to use for each single operation. Generally, the following rusles are being applied:

The VAT account and the account from which the VAT is being deducted have to be in basic currency. It is impossible to use a VAT code tto deduct the VAT from a foreign currency account.

In order to record operations with VAT that have accounts in foreign currency as their counterpart, two transaction rows have to be used:

In the example, the basic currency is the CHF. We are dealing with a national purchase, but paid from a foreign curency account (EUR).

When a new transaction is being entered, the data in the above mentioned columns have to be completed.

In the info window, the program indicates:

For the accounts related to the transaction row on which one is positioned: